Qbox to join forces with Instaclustr. Read about it on our blog post here.

How many nodes should the cluster have? It’s a difficult question. Ultimately, it will boil down to questions like the following:

The answer to that question depends on a lot of factors, like expected load, data size, hardware, etc. In this tutorial post we discuss how to avoid the split brain problem.

For this post, we will be using hosted Elasticsearch on Qbox.io. You can sign up or launch your cluster here, or click “Get Started” in the header navigation. If you need help setting up, refer to “Provisioning a Qbox Elasticsearch Cluster.“

What is Split Brain?

The problem comes in when a node falls down or there’s simply a lapse in communication between nodes for some reason. If one of the slave nodes cannot communicate with the master node, it initiates the election of a new master node from those it’s still connected with. That new master node then will take over the duties of the previous master node. If the older master node rejoins the cluster or communication is restored, the new master node will demote it to a slave so there’s no conflict. For the most part, this process is seamless and “just works.”

However, consider a scenario where you have just two nodes: one master and one slave. If communication between the two is disrupted, the slave will be promoted to a master, but once communication is restored, you end up with two master nodes. The original master node thinks the slave dropped and should rejoin as a slave, while the new master thinks the original master dropped and should rejoin as a slave. Your cluster, therefore, is said to have a split brain. 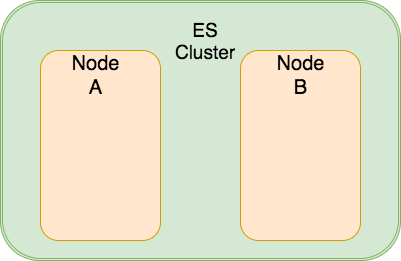 The cluster holds a single index with one shard and one replica. Node A was elected as master at cluster startup and holds the primary shard (marked as 0P in the schema below), while Node B holds the replica shard (0R). 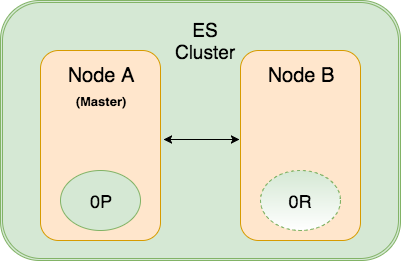 What if, for any reason, communication between the two nodes would fail due to network failures or simply because one of the nodes becomes unresponsive (as in a case of a stop-the-world garbage collection)? 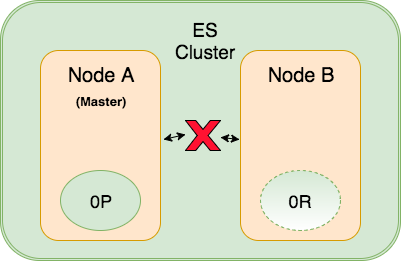 Both nodes believe that the other one has failed. Node A will do nothing because it’s already elected as master. But Node B will automatically elect itself as master because it believes it’s part of a cluster that no longer has master. 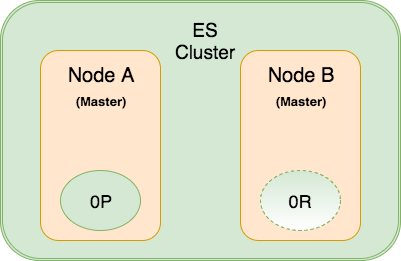 In an Elasticsearch cluster, it’s the responsibility of the master node to allocate the shards equally among the nodes. Node B holds a replica shard, but it believes that the primary shard is no longer available, and it will therefore automatically promote the replica shard to a primary. 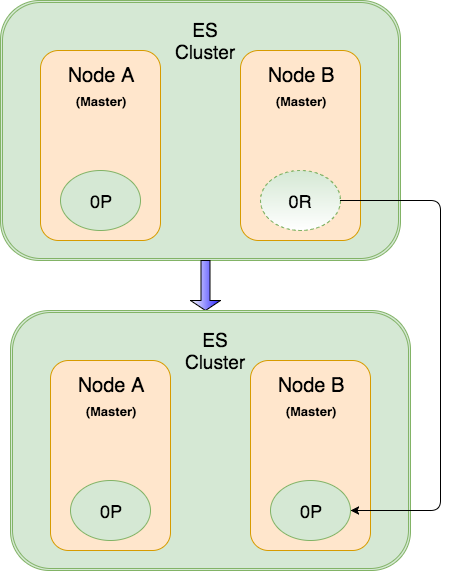 Our cluster is now in an inconsistent state or the red state. In this situation the two copies of the shard have diverged, and it would be really difficult to realign them without a full reindexing. Indexing requests that will hit Node A will index data in its copy of the primary shard, while the requests that go to Node B will fill the second copy of the shard. 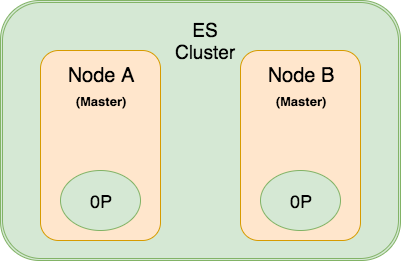 Even worse, for a non-cluster aware indexing client (e.g. REST interface) this cluster state will be totally transparent because indexing requests will be successfully completed every time, regardless of which node is hit. The split brain problem would only be slightly noticeable when searching for data: depending on the node the search request hits, results will differ.

It’s not intuitive to set the minimum_master_nodes parameter to 2 in the case of a two node cluster, but in this case if a node fails, the whole cluster fails. Although this removes the possibility of the split brain occurring, it also negates the built-in high-availability mechanism through the usage of replica shards.

If you’re just starting out with Elasticsearch, the recommendation is to plan for a 3-node cluster and set the minimum_master_nodes to 2, limiting the chance of the split brain problem, but still keeping the high availability advantage. We can afford to lose a configured replica node but still keep the cluster up-and-running.

A 2-node cluster provides the possibility of either choosing to live with the possibility of the split brain while keeping the high availability, or choosing to avoid the split brain but lose the high availability. If you really want to only use 2 nodes, you can still prevent split brain by using another Elasticsearch config setting, node.data. By simply setting this to false on one of the two nodes in your cluster, you effectively prevent that node from ever being a master node. However, by doing that, you also lose any failover ability because if the master node goes down, the entire cluster is down.

The best option however in this case is to add a node to the cluster and avoid compromise. This sounds very drastic, but it doesn’t have to be. For each Elasticsearch node you can chose if that node will hold data or not by setting the node.data parameter. The default value is “true”, meaning that by default every Elasticsearch node will also be a data node.

A third node with node.data parameter set to “false” will never hold any shards, but it can be elected as master. This third node can also be initialized on a quite less expensive hardware as it will be a data-less node. The minimum_master_nodes can be finally set to 2 because we have a scaled to a 3-node cluster from 2-node cluster, thus, avoiding the split brain and still afford to lose a node without losing data.

Now imagine that you have a cluster with three master-eligible nodes, and minimum_master_nodes set to 2. If a network split separates one node from the other two nodes, the side with one node cannot see enough master-eligible nodes and will realise that it cannot elect itself as master. The side with two nodes will elect a new master and continue functioning correctly. As soon as the network split is resolved, the single node will rejoin the cluster and start serving requests again.

This setting should be set to a quorum of master-eligible nodes:

This setting can also be changed dynamically on a live cluster with the cluster update settings API:

An advantage of splitting the master and data roles between dedicated nodes is that you can have just 3 master-eligible nodes and set minimum_master_nodes to 2. You never have to change this setting, no matter how many dedicated data nodes you add to the cluster.

The minimum_master_nodes setting is extremely important to the stability of your cluster. This setting helps prevent split brains.

When you have a split brain, your cluster is at danger of losing data. Because the master is considered the supreme ruler of the cluster, it decides when new indices can be created, how shards are moved, and so forth. If you have 2  masters, data integrity becomes perilous because you have 2 nodes that think they are in charge.

This setting tells Elasticsearch to not elect a master unless there are enough master-eligible nodes available. Only then will an election take place.

This setting can be configured in your elasticsearch.yml file:

But because Elasticsearch clusters are dynamic, you could easily add or remove nodes that will change the quorum. It would be extremely irritating if you had to push new configurations to each node and restart your whole cluster just to change the setting.

For this reason, minimum_master_nodes (and other settings) can be configured via a dynamic API call as stated previously. It can be updated while the cluster is online:

This will become a persistent setting that takes precedence over whatever is in the static configuration. You should modify this setting whenever you add or remove master-eligible nodes.

The basic ES discovery.zen properties can be configured as follows:

The above setting discovery.zen.fd.ping_timeout says that node detection should happen within 10 seconds. The unicast hosts are “master_node_01″, “master_node_02″, “master_node_03″. In addition, 2 minimum master nodes need to join a newly elected master in order for an election to complete and for the elected node to accept its mastership. We have 3 master nodes.

Give it a Whirl!

Questions? Drop us a note, and we’ll get you a prompt response.

Not yet enjoying the benefits of a hosted ELK-stack enterprise search on Qbox? We invite you to create an account today and discover how easy it is to manage and scale your Elasticsearch environment in our cloud hosting service.