In this blog series, we introduce the Beats platform for Elasticsearch.

Beats platform is a complete package. You can collect various operational data and index to Elasticsearch via logstash and visualize using Kibana.

In this post we will concentrate more on packetbeats component of the beats platform.

As said above, the beats platform offers us an all in one solution for data shipping to Elasticsearch. Beats platform, when used with the ELK stack, would provide us the enriched visualization of the analytics for the operational data indexed.

Here are the main components of the Beats platform.

Installation of packetbeats can be done in either of the two ways:

The second approach would be the ideal solution because it doesn’t interfere with the processes in application servers and would be easy to manage and configure.

Here the main limitation coming in to play might be the cost involved in setting up separate servers for packetbeats.The suggested architecture is as shown in the block diagram given below:

As you can see from the above figure, there are two separated networks which have packetbeats installed. The output from each of the packetbeats instance is forwarded to a logstash event. This enables us to enrich the data by parsing it using logstash and convert it to the formats we require. The next step involves the passing of the logstash output to Elasticsearch to index it. Now the last and final step is to visualize the indexed data in Elasticsearch using Kibana.

Learn about our new open source product Supergiant: The first datacenter total control system that makes it easy to save up to 60% on your AWS bill.

We can install packetbeats in linux by typing in the following commands in the terminal:

For platforms other than Linux, you can refer to the documentation here. As the next step we need to install filebeats, which is to act as an interface between packetbeats and Elasticsearch. It can be installed as below:

Open the file packetbeat.yml in an editor with administrator permission and then make the following changes in the output section.

First of all, since we are going to ship our data to logstash first, we need to disable the data forwarding to Elasticsearch first in the packetbeat setting. To do that, under the outputsection, the default output would be specified as elasticsearch and the port as localhost:9200.

In the above figure you can see I have commented out, the elasticsearch and the hosts by adding # in front of it.

Now scrolling down the file after this, uncomment the logstash and the hosts section. Now change the port for the hosts to localhost:5044, which in general is the port given to logstash, like in the picture below:

Filebeat config
Change the output section in the filebeat configuration yml file ( located in /etc/filebeat/filebeat.yml) from elasticsearch to logstash as shown below:

Logstash config
Let us see what the setup changes in the logstash config file (you can see the setup and installation of logstash in this qbox blog) are. Since the input is from beats, we need to specify that. The logstash.conf file would like below: 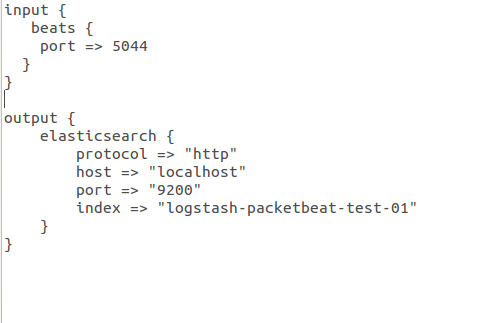 Now that we have configured the setup, we will see how to start indexing the data. For that we need to start all three services. Here are the commands to start all of them:

If you take the head plugin installed in your browser and check for the indexlogstash-packetbeat-test-01 in Elasticsearch head, you can see there would be numerous documents indexed in that index.

Let us have a look at a sample document indexed via packetbeat:

In this post we have seen the introduction to the beats platform of Elasticsearch, how to set up packetbeat, and how to connect it with logstash to index data to Elasticsearch.

In the next post we will see how to visualize the packetbeat data using Kibana, as well as the necessary changes in set up for achieving the same.

With Instaclustr, you can now create 100% open source Apache2 licensed OpenSearch clusters. Sign up for a 30-day free trial (no credit card required). Click “Get Started” to find out more.

Get Started
5 minutes to get started