Qbox to join forces with Instaclustr. Read about it on our blog post here.

When I started out with Elasticsearch, I found it very frustrating that there were no articles that provided a reference point for bulk indexing. I had to reference several articles and books before I figured out how simple it actually is to bulk index data.

Accordingly, if you want to understand how bulk indexing works under the hood in Elasticsearch, it will take a bit more effort than merely reading this article — although this is certainly a good place to start!

If you are planning to do bulk indexing, there are some important considerations that you will have to consider before you do anything. For example, usually, if you are going to create an index and set a mapping, you will have to first create the index with that mapping. If you are using the bulk index API, then you don’t have to actually create the index because the index name will be part of the data sent to Elasticsearch. That is, the index will be automatically created.

However, if you want to set a specific mapping, you will have to create the index with that mapping first. In addition, something else to consider is that you shouldn’t be doing any queries / searches on the cluster while indexing data via the bulk index API. Doing so can cause significant performance issues.

When you index data using the bulk index API, the data needs to follow a specific structure as seen here in this screenshot from my text editor:

If we decided to index this data into Elasticsearch, then we could do it from the command line with curl using the following command:

Here is a screenshot of the output of running the above command:

Correspondingly, this is how the data looks like if we view it in Kibana: 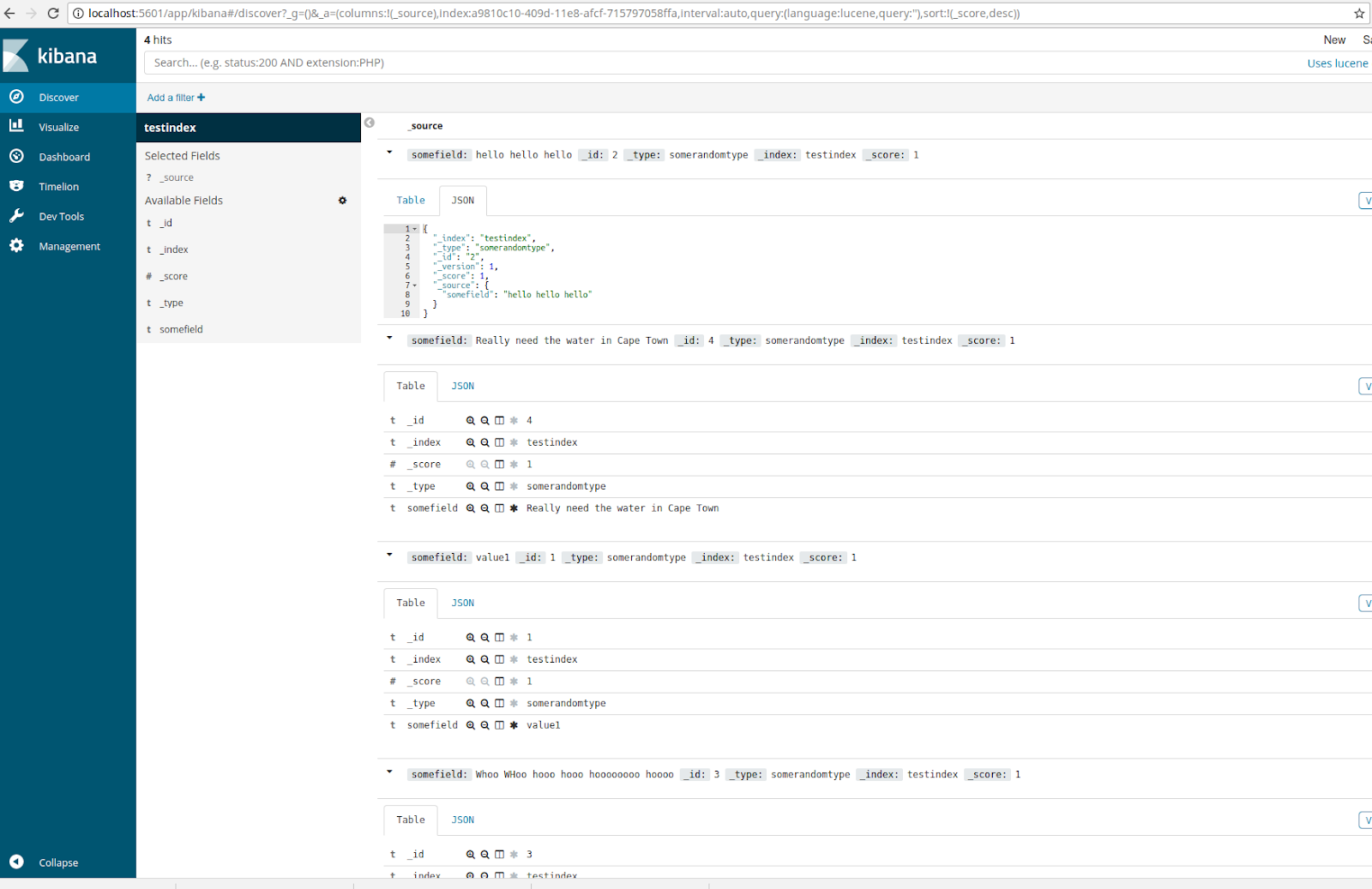 This format is a bit hard to understand but I will explain it shortly. Once you understand this format and why it is used by Elasticsearch, it makes bulk indexing much easier. The format looks something like this:

Here is an example:

1. The action to be performed here is index because we are going to index data. (In total, there are four action verbs to understand: create, index, update, and delete.)

2. The index we are indexing the data into is “testindex” We don’t need to create the index because as long as we specify the index name in the metadata of the related action to be performed, the index will be created during the bulk indexing operation.

3. We need to specify the type by which the data will be indexed. In this case it will be of type “car” (If you need to refresh your memory, see the Qbox article “All about the Sense Web Application”). If the equivalent for an Elasticsearch index is a database, then a “type” is the Elasticsearch equivalent of a Table (I will return to this later).

4. Your actual data to index into Elasticsearch is called the request body.

Let’s put it all together so you can see what everything looks like. This is the metadata line and request body for one document to be indexed:

This example shows an optional _id  field in themetadata_related_to_action_performed section of the request. However, you can just specify the _type and the _index, and Elasticsearch will automatically generate the ID values.

Let’s expand our bulk indexing example a little bit without specifying _id, and using some more interesting example data for the request body. Here is our sample data to index:

Here is a screenshot of the data in my text editor:

Now, I can index this data using curl  like this (after I first saved it in a file called country_bulk.json):

The above command will produce the following output:

For our final example I made use of the dataset that was already correctly formatted for bulk indexing, and then used AWK to get the dataset back to normal:

We use the following script to help add the metadata to allow this data to be indexed via the bulk index API:

Here is a screenshot of the script in vim. The line that uses rstrip is there to remove the newline that the Python interpreter inserts when printing the values to the screen.

Now you can run this script. Just save it as script.py

Now let’s have a look at the output:

Here is a screenshot of the output that was produced:

You can now go ahead and index the data with the following command:

Now we can retrieve two documents from the indexed data using the bulk index API:

See below the output that you can expect to see from running the command above: